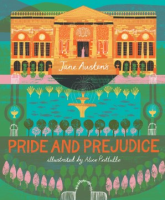 General Note
"First published in the United States of America in 2015 by Rockport Publishers, a member of Quarto Publishing Group USA Inc."
General Note
Pages [236-241] fold out.
Description
When Elizabeth Bennet meets Mr. Darcy she is repelled by his overbearing pride, and prejudice towards her family. But the Bennet girls are in need of financial security in the shape of husbands, so when Darcy's friend, the affable Mr. Bingley, forms an attachment to Jane, Darcy becomes increasingly hard to avoid.
Description
"Enjoy Jane Austen's witty novel of love and misunderstanding as you've never seen it before! Alice Pattullo's colorful interpretation of Pride and Prejudice follows the romantic adventures of Bennett sisters, Mr. Bingley and his dour friend Mr. Darcy. Her folkloric, multi-faceted images, breathe new life into this engaging romantic novel"-- Publisher.
Biographical or Historical Data
Jane Austen, the seventh child of the local rector, was born in 1775 at Steventon, Hampshire. In 1801 she moved with her parents to Bath but returned to Hampshire when her father died, settling in the village of Chawton. She remained there until 1817, when she moved to Winchester to be within easy reach of her doctor. She died that year, at age forty-one, and is buried in Winchester Cathedral, which also contains a plaque in honor of her memory. Four of her novels were published anonymously in her lifetime, two more, one of which was Persuasion, appeared posthumously.
Biographical or Historical Data
Alice Pattullo is an illustrator and printmaker based in East London. She graduated in 2010 with a First Class Honours in Illustration from Brighton University. She works predominantly in screen print producing limited edition prints for sale in various outlets across the UK and online. Research is at the heart of her practice and her work is often inspired by British folk tradition and superstition.