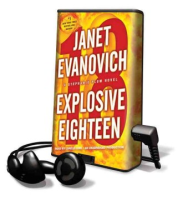 General Note
Requires headphones.
General Note
Playaway Digital Audio.
General Note
Title from Playaway label.
General Note
"HDAUDIO."
General Note
"Random House Audio"--Container.
General Note
Release date supplied by publisher.
General Note
Previously released by Random House, Inc., p2011.
General Note
Issued on Playaway, a dedicated audio media player.
General Note
One set of earphones and one AAA battery required for playback.
Participants/Performers
Read by Lorelei King.
Description
Before Stephanie can even step foot off Flight 127 from Hawaii to Newark, she's knee deep in trouble. Her dream vacation turned into a nightmare, she's flying back to New Jersey solo, and someone who sounds like Sasquatch is snoring in row 22. Worse still, her seatmate never returned to the plane after the L.A. layover. Now he's dead, in a garbage can, waiting for curbside pickup. His killer could be anyone. The FBI, the fake FBI, and guns-for-hire are all looking for a photograph the dead man was supposed to be carrying. Only one other person has seen the missing photograph--Stephanie Plum. Now she's the target, and she doesn't intend to end up in a garbage can.